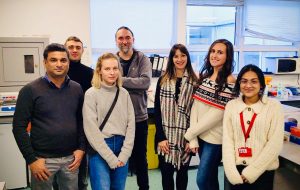 Epilepsy, characterized by the occurrence of spontaneous seizures, is one of the most common chronic brain diseases affecting approximately 1% of the world population. Clinical challenges include drug- unresponsiveness (~30% of patients) and adverse side-effects to current medication, the lack of disease-modifying therapy and the fact that there are no biomarkers for seizure diagnosis and to predict disease progression.

The main focus of our research is to study pathological mechanisms underlying the development of epilepsy and to identify novel disease biomarkers for a better and faster diagnosis of seizures based on purinergic signalling.

Demonstrating the therapeutic potential of treatments based on purinergic signalling, we have been the first to show the anticonvulsive and anti-epileptogenic potential of targeting the ATP-gated P2X7 channel (Engel et al., 2012, FASEBJ; Jimenez-Pacheco et al., 2016, J Neurosci).

P2X7 receptor expression and function increases following status epilepticus and during epilepsy, both in animal models and the patient brain.

More recently, our group has also shown a role for the metabotropic P2Y receptor family in epilepsy (Alves et al., 2018, Epilepsia) with antagonists blocking the P2Y1 receptor reducing seizures during status epilepticus and during chronic epilepsy.

The newly-hired Post-doctoral Researcher will be working in the laboratory of Dr. Tobias Engel testing new treatment strategies for epilepsy.
Specifically, the duties of the post are:

Qualifications:
• A recent PhD in a related area such as Neuroscience.
• Experience working with laboratory animals if possible.
Knowledge & Experience – (Essential):
• General lab experience; molecular biology and/or neuroscience research area would be an advantage.
• Familiarity with laboratory Health and Safety protocols and procedures.
• Strong organisation and project management skills to ensure tasks are delivered on time and within agreed parameters.
• Strong communication skills with a proven ability to liaise with various stakeholders across a number of different departments.
Skills & Competencies:
• Scientifically competent.
• Effective communications style – excellent English.
• Proficiency in Computer/Presentation skills.
• Ability to make decisions and meet deadlines.
• Ability to work on one’s own initiative as well as in a team environment.
Application Process
Please apply online no later than 11.30pm on April 18th with your CV and Covering Letter. Job reference: 026192
Informal Enquiries can be directed to Dr Tobias Engel at tengel@rcsi.ie